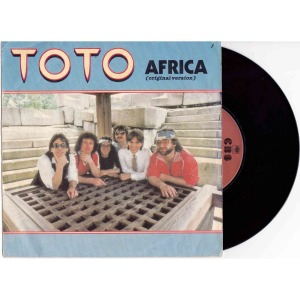 Following years of gradually building, renewed interest in Toto’s 1980s #1 hit “Africa”, the track has once again found life on the charts.

Since the early part of the decade, Toto’s soft rock classic “Africa” has experienced a revival through YouTube covers, memes, bots and television. As Billboard notes, its staggering streaming count of 270 million (unusually high for a 20th century release) and use in pop culture in the United States suggests it has been embraced as a millennial anthem.

However, the increasing interest in the track always seemed to be squarely in the rearview. And yet, as we hit the second half of the year, it’s clear the nostalgia factor for “Africa” has never been greater. So how’d we finally get here?

On December 6, 2017, Twitter account WeezerAfrica began a months long campaign to get her favorite band, Weezer, to cover “Africa”. The account, run by fourteen year old Mary, was thrown several curveballs — including a cover of Toto’s “Rosanna” — before eventually achieving its goal when the group released an official cover to iTunes in late May.

Upon its release, the Weezer version quickly caught fire, rising to #1 on the US iTunes sales chart and eventually selling 17,000 copies in its debut week and increasing to 28,000 sold in its first full week. It landed on the Hot 100, becoming Weezer’s first entry on the survey this decade (#89). The original version sold 8,000 copies that same week.

Although not a blockbuster by any means, the sales of the remake represented healthy interest and “Africa” joined the likes of “Zombie” (Bad Wolves) and “The Sound of Silence” (Disturbed) in the growing ranks of recently successful rock covers.

A month later and neither version has disappeared from the sales chart.

In fact, Toto’s version, which re-entered the digital chart at the top of 2018 and has stayed in the top 200 throughout most the year (likely as a result of the growing internet hype and the issuing of a new Greatest Hits), has maintained its improved sales in a continuously declining market. While it was selling approximately 3,000 downloads a week in the first few months of the year, it’s now selling nearly 5,000 and is just 2,000 behind the Weezer cover in units sold per week.

With 1.9 million in release to date digital sales, over 80,000 of which stem from 2018 transactions, the renewed success of “Africa” and the enthusiastic embrace of its remake proves audience nostalgia is worth capitalizing on.